At twenty five feet long, the Malibu 25 LSV stands on its own as a titan of performance wake boats. This behemoth of a watercraft makes some serious waves when it is dialed in for wakeboarding or wakesurfing. The few extra feet also give the 25 some serious leg room inside the boat at a nineteen person capacity. If two is a party and three is a crowd then the 25 LSV is bringing down the house in style, which is exactly what we here at Memphis Boat Center did last weekend in Pickwick. 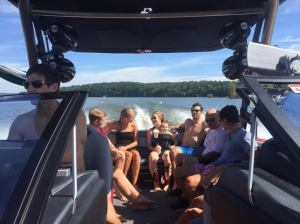 With Enrique Martinez at the helm of this monster we cruised around the lake searching for eager water sport enthusiasts to demo the surf wave as well as the wakeboarding wake. Ryan Chedotal and Katie Erickson joined in on the action to help with surfing lessons and capturing photos. It was very hard for people not to stop us on the water and ask about the boat and its many new features. If anyone wanted to hop on the boat and take a test run behind this beast we were more than happy to provide them with the opportunity. 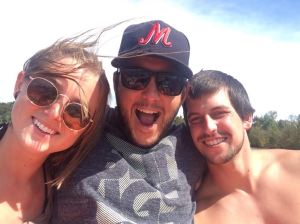 The weekend was full of excitement, action, and of course laughter. It’s impossible to frown when someone learns to surf without the rope for the first time, which is what many of our customers got to experience. A short wakeboarding demo Saturday morning was followed by some serious surf lessons, and the customers were very eager to try out the monstrous wave that the LSV spits out. Everyone that attempted to surf succeeded in finding the sweet spot on our wave and actually “surfing” behind a high performance boat. 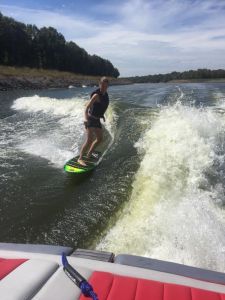 The 25 LSV may throw a large wake, but it is still a very user friendly boat with features like Surf Gate and the new Surf Band. The Surf Band allows the rider to control what side they want to surf on, the speed of the boat, and the power wedge, all while riding behind the boat. This new feature makes the drivers job very simple, and each surfer can tinker with the wave to make it perfect for their surfing ability. This new technology has opened up the front door for surfing as well as wakeboarding because the Surf Band works on the long line as well.

As the season begins to slow down, some of us are still trying to chase that last sliver of summer all the way into October. If you see “El Toro Rojo” (that’s Enrique’s nickname for the 25) floating around at Pickwick don’t hesitate to stop and say hello! We are always looking to demo our boats to people who have an interest in water sports, so grab your surf board and come ride with us!